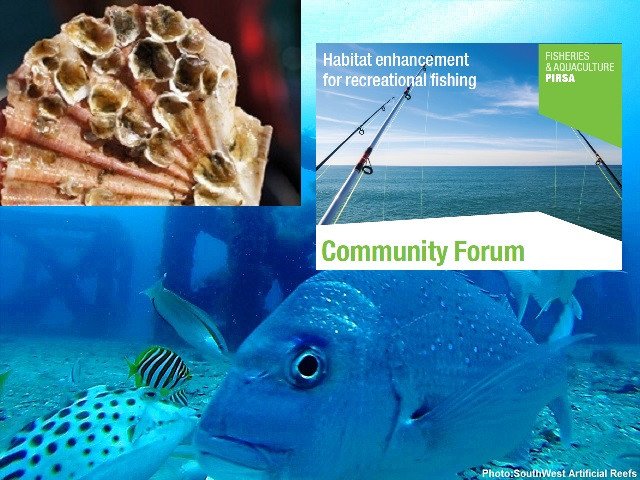 A Community Forum to provide information and facilitate community input on the South Australian Government’s $600,000 Artificial Reef Habitat Project is was held on May 6th at the Adelaide Sailing Club, West Beach.

Presentations were given by the Habitat Enhancement Working Group chair Rob Lewis, Fisheries Victoria, The Nature Conservancy and RecFish SA. This was followed by public comments and discussion about the presentation, reef types and potential locations.

The forum was presented with information and case studies about different types of of recent artificial reef projects in Australia. These included offshore purpose built “fish cubes”, inshore & estuary “reef balls” as well as shellfish reef (re)building and restoration.

Attendees were interested to learn that 85% of natural shellfish reefs have been lost worldwide and that the figure for SA is worse than that global average (around 99% lost). SA native oyster reefs are considered”functionally extinct”. Recent Adelaide University research has revealed that SA Gulfs used to have over 1500Km of natural oyster reefs and now none of that remains.

Oyster and mussel reefs play an important part in the marine ecosystem; not only do they attract fish and provide an important food  source, they also filter enormous volumes of water and can play an important role in the nutrient cycle, including providing better conditions for sea grass.

In the United States there have been successful large scale projects to replace lost shellfish reefs and a project is now underway in Victoria. Port Phillip Bay has also lost most of its original native oyster and mussel reefs and fisheries, anglers and the Nature Conservancy has been working on a project to reverse the trend. It is likely that if a reef project was to be built in SA, oysters may need to be seeded on new reef structures to keep them above the sand.

All contemporary reef type options and possible locations remain on the table for the SA Artificial Reef project and the community are encouraged to learn more and to have their say via the PIRSA Habitat Enhancement Community Feedback Page.

A second Community forum is expected to take place later in 2015, after the online consultation has concluded.

RecFish SA are always keen to hear from you! Let us know your thoughts: consultation@recfishsa.com.au

Check out these links of interest: