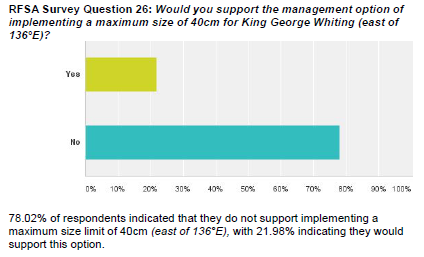 RecFish SA would like to thank all of the South Australian recreational fishers who provided feedback!

Survey responses and feedback provided, indicated both significant levels of support for some of the proposed changes and options, as well as high levels of opposition and concerns about others. A number of broader issues were also raised in the feedback received. Some of these concerns relate to the quality of the recreational fishing data presented as informing the review process.

While RecFish SA recognise and support the principle that fisheries should be managed using the best available information, a number of concerns are raised in our response documents. Specific concerns raised by the community, about the 2013/14 South Australian Recreational Fishing Survey (SARFS), relate to methodology & sample size, as well as, for a number of fisheries, the accuracy of estimates. Another concern is the reliability of some data being used to inform important management decisions.

A number of issues raised also relate to the level of resourcing for the recreational fishing sector. It is considered that this has not been historically sufficient and while this is in many cases, a political or public policy question, rather than strictly a fisheries policy question; RecFish SA are of the view that it was appropriate to raise this issue at this time. We believe that resourcing cannot be decoupled from the current considerations, because many community concerns, including the need for more and varied research, improved compliance effort and recreational fishing sector development, are symptomatic of the long term resourcing situation. Potential solutions to these issues are likely to be equally constrained by resourcing and thus beyond the ability of the Fisheries department alone, to address.

RecFish SA hope that the feedback presented will be of use to PIRSA Fisheries in understanding some of the sentiments of the recreational fishing community as well as assisting in the identification of areas to be improved.

Download the RecFish SA Submission on the Size, Bag and Boat Limit Review

The Draft Management Plan for Recreational Fishing in SA was also out for public consultation. RecFish SA provided a written submission and spoke on this at the public hearing on 11 May. You can download the corresponding document here.